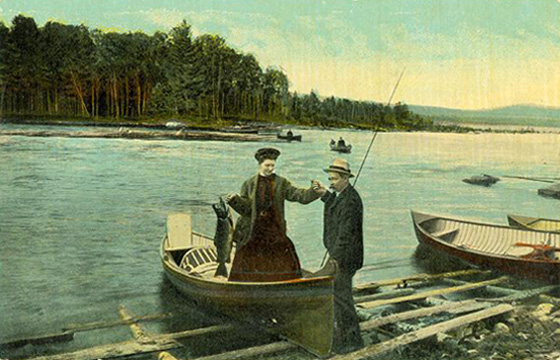 A hundred years ago, giants were common in the Rangeley Region – giant brook trout that is. Around the time of the Civil War, sportsmen discovered that the Rangeley waters held huge brook trout of 6, 8, 10 and even 12 pounds. Nowhere else were brook trout of this size known to exist. The unique combination of clean cool water, abundant forage in the form of the little blueback trout, and a unique genetic make up, resulted in brook trout that drew sportsmen from all over the country to the western mountains of Maine.

Today the Rangeley Region Guides’ and Sportsmen’s Association is working to improve this brook trout fishery. The Association has played an important role over its100 plus year history in helping maintain the area’s quality sporting experience. Actually, the original Rangeley Lakes Guides’ Association was founded on November 7, 1896 “to protect and aid in the propagation of fish and game; to secure wise and practical legislation on all matters pertaining to the interest of the fish and game of the Rangeley Region; to secure good reliable guides for sportsmen and tourist; and to regulate a uniform rate of wages for Association members”. It was also focused on defeating Fly Rod Crosby’s effort to require the licensing of guides. At that time when most of Rangeley’s population earned their income by providing services to the “sports”.

As the number of guides declined in the early 20th century the Association became inactive, but in 1934 the Rangeley Guides Association was established. Subsequently the Association’s membership was expanded to include sportsmen, and meetings were held at the former American Legion Hall. The Association was responsible for installing a fish screen at the foot of Rangeley Lake, extending the fishing season until October 15, funding rearing pools and stocking fish and birds locally. They were also active on the social front, sponsoring the Hunter’s Ball and hosting the Commissioner of Inland Fish and Game and his staff at an annual Rangeley Cook Out. The tradition of the Guides’ preparing a shore lunch for their sports was expanded to include the Rangeley community.

By the early 1990’s, the membership had once again dwindled to a hand full. Thanks to the efforts of June and Ken Copeland and Ferris Clark, the club continued until a group of concerned sportsmen and women joined the organization and began a revival that has restored RRG&SA to its historical role as one of the largest, most active and influential local sporting organization in Maine. With membership of over 600, they are active on many fronts to improve the quality of Rangeley’s outdoor experience.

Rangeley Region Guides’ & Sportsmen’s Association members building on a 100 year tradition, are actively working to insure the region’s wonderful outdoor sporting traditions, fisheries and wildlife will be available to future generations. With the leadership of the Rangeley Region Guides’ & Sportsmen’s Association, the support of Maine’s Department of Inland Fisheries and Wildlife and participation of the sportsmen and women, the giants may once again swim in Rangeley’s fabled waters.